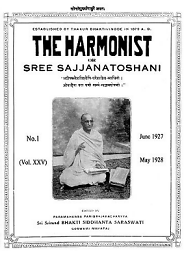 We are pleased to present the complete compilation of "The Harmonist As It Is"
on the occasion of the appearance day of Srila Bhaktisiddhanta Saraswati Thakur.

It seems miraculous that the rare and dilapidated copies of The Harmonist magazine are now brought to life again with the publication of this collection. This complete collection is printed at the Radha Press in New Delhi. Radha Press has already a historic relevance for innumerable Gaudiya Vaishnavas, the followers of the incamation of God known as Sri Chaitanya Mahaprabhu, Who appeared in Gauda Desh, West Bengal, India in 1486 AD. On this same printing press, my spiritual master, the world-acharya, Srila A.C. Bhaktivedanta Swami Prabhupada, printed his first English versions of Srimad Bhagavatam (The Sweet Pastimes of Lord Sri Krishna), and his Back to Godhead Magazine, before departing to the USA in 1965. The Gaudiya Vaishnava philosophy has now spread throughout the entire world, most particularly because of the impetus given by Srila A.C. Bhaktivedanta Swami Prabhupada, the founder-acharya of the International Society for Krishna Consciousness. 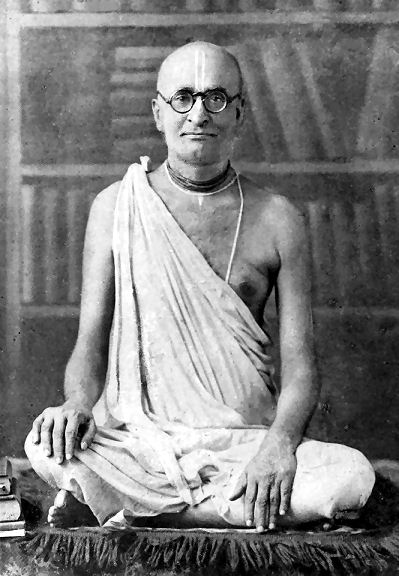 Previous to this edition, a number of new magazines using the name The Harmonist have appeared in the Eastem and the Western world. Therefore, in the mood of Srila A.C. Bhaktivedanta Swami, who named his translation of the Bhagavad-gita as the ‘Bhagavat-gita As It Is’, we have decided to name this reprint as The Harmonist As It Is to indicate that this publication is of the original magazines. Actually, this effort is the first exact replica of the original publications.

The monthly publication of The Harmonist magazine began in June of 1927 in Kolkata, Bengal, India, under the direction of Srila Bhaktisiddhanta Saraswati Goswami Prabhupada. The foreword of the first English edition reads as follows “The Sajjana-toshani made her first appearance in the year 1879 in the modest form of a Bengali spiritual monthly edited by Thakur Bhaktivinoda. The paper remained under his editorship for seventeen years. She was later made over to the present editor who conducted the paper ‘till she attained her twenty-fourth year of publication.”

Srila Bhaktisiddhanta Saraswati started the English Version of the same publication in June of 1927 continuing until June 1936, before his departure firom this world on January 1, 1937. He continued in Roman numerals the sequential order of the original Bengali editions; thus, the English Version began as Volume XXV and ended as Volume XXXII. The full collection of The Harmonist comprises eight volumes, and each volume contains twelve monthly magazines. To better facilitate the readers’ reference, we have decided to designate each volume of The Harmonist As It Is firom No.l to No.8. In brackets the readers will also find the Roman numerals of the original Bengali edition. To facilitate a comprehensive and easy reference to the main subjects contained in the magazines, we have compiled a simple index to each volume. The same general index was then compiled for the complete collection, which was printed as a separate booklet.

The only original and most complete collection of The Harmonist magazine has been under my care since December of 1991. The search and collection of the sometimes very dilapidated magazines was the painstaking and tireless task of my godbrother Sripad Bhaktiprajnana Bharati Maharaja, who began collecting the editions around 1975. During 1987, while we met in Sri Vrindavana Dhama, he requested me to take care of such an important treasure of the Gaudiya Vaishnava community.

Because of various circumstances I took possession of the complete collection only on 1991, recovering it from the house of a Vrajavasi and placing it in my residence at Vaishnava Khanda of Radharamana Mandira. Since then, many god brothers came to know about it, but in spite of several suggestions and requests, somehow none could actually come forward to promote or facilitate the printing. While holding a web site for a couple of years since 2001, I advertised the upcoming publication of The Harmonist and requested contributions to such an end. However, although receiving feedback from several interested devotees, no practical or financial commitment manifested.

Finally, after so many years of expectation, Divine Providence allowed me to produce the necessary finances to reprint the entire collection as it actually is. The Publishing of The Harmonist As It Is is therefore an exact photographic reproduction of each page of such important and historic legacy of the Gaudiya Vaishnavas and indeed students of religion around the world.

The Harmonist is the reservoir of all clear conclusions of the predecessor acharyas, regarding the most important philosophical subjects any aspirant devotee should know. Furthermore, this collection establishes the veracity of the English translations of important Vaishnava literature, such as Jaiva-Dharma and Chaitanya Bhagavata, since it contains partial translations supervised and sanctioned by Srila Bhaktisiddhanta Saraswati Goswami Prabhupada himself.

This collection contains articles that establish perfect guidelines to practice life as a brahmachari (celibate Student), grihastha (married responsibilities), vanaprastha (practical preparation for the goal of life) and sannyasi (full-time contemplation of the Divine Reality). The readers will also find spiritual guidelines on how to behave in society in general through various articles on social, economical, educational and political subjects. Although these articles were written 70 years ago, they still maintain an amazing actuality.

The Publishing of this historic literature serves as a unique transcendental reference for all Gaudiya Vaishnavas and all willing to leam about bhakti, pure devotion to the Supreme Lord. Thispublication is meant to re-ignite Gaudiya culture around the globe and is dedicated to all sincere devotees of Sri Chaitanya Mahaprabhu.

I offer my heartfelt thanks to Sripad Raddhanti Dasa (Juan Pigna), who selflessly came forward with assistance and financial support to help in printing this important collection.