Bhagavad Gītā As It Is - Original 1972 Macmillan Complete Edition

Śrīla Prabhupāda: "Bhagavad Gītā As It Is presents and
explains the Gītā's verses without changing their timeless meaning." 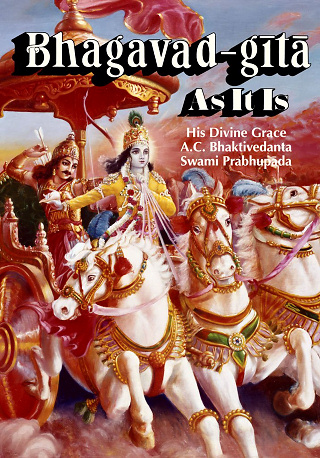 "This knowledge is the king of education, the most secret of all secrets. It is the purest knowledge, and because it gives direct perception of the self by realization, it is the perfection of religion. It is everlasting and it is joyfully performed." (Bhagavad Gītā 9.2.)


Śrīla Prabhupāda has stated: "Bhagavad Gītā As It Is presents and explains the Gītā's verses without changing their timeless meaning."

Unfortunately after Prabhupāda's demise in 1977, some of his leading disciples, such as Jayādvaita Swami, have unauthorizedly changed and edited most of Śrīla Prabhupāda's original translations and books, thus perverting and misinterpreting the real meaning and rendering them useless. Therefore the readers might be warned to only read the original pre 1977 published books of Śrīla Prabhupāda. Otherwise students might be mislead by bogus philosophy preached by Iskcons false successor gurus.

Śrīla Prabhupāda comments:
"Why you are, I mean to say, killing others and yourself by interpreting Bhagavad-gītā?"

Śrīla Prabhupāda...."So if you read Bhagavad-gītā as it is, that is mad-āśrayaḥ. But if you interpret Bhagavad-gītā according to your rascal imagination, that is not Bhagavad-gītā. Therefore it is called mad-āśrayaḥ, "under My protection, as I am ..." We are therefore presenting Bhagavad-gītā as it is. We do not change. Why should you change? What right you have got to change? If Bhagavad-gītā is a book of authority, and if I make my own interpretation, then where is the authority? Can you change the lawbook according to your interpretation? Then what is the meaning of that lawbook? That is not lawbook. You cannot change. Similarly, if you accept Bhagavad-gītā as the book of authority, you cannot change the meaning. That is not allowed. What right? If you have got some opinion, if you have got some philosophy, you can write in your own book. Why you are, I mean to say, killing others and yourself by interpreting Bhagavad-gītā? You give your own thesis in a different way. But these people, they take advantage of the popularity of Bhagavad-gītā and interpret in a different way according to their own whims. Therefore people do not understand what is Kṛṣṇa. That is the difficulty. And the purpose of Bhagavad-gītā is to understand Kṛṣṇa. And all the so-called scholars' and politicians' commentary is to banish Kṛṣṇa or to kill Kṛṣṇa—the Kaṁsa's policy. The Kaṁsa was always thinking of Kṛṣṇa, how to kill Him. This is called demonic endeavor. So that will not help you." (Śrīla Prabhupāda's Lecture : Bhagavad-gītā 7.1 -- Hyderabad, April 27, 1974)

Śrīla Prabhupāda: Originally I wrote Bhagavad-gītā As It Is in the form in which it is presented now.
When this book was first published, the original manuscript was, unfortunately, cut short to less than 400 pages, without illustrations and without explanations for most of the original verses of the Śrīmad Bhagavad-gītā. In all of my other books—Śrīmad Bhāgavatam, Śrī Īśopaniṣad, etc.—the system is that I give the original verse, its English transliteration, word-for-word Sanskrit-English equivalents, translations and purports. This makes the book very authentic and scholarly and makes the meaning self-evident. I was not very happy, therefore, when I had to minimize my original manuscript. But later on, when the demand for Bhagavad-gītā As It Is considerably increased, I was requested by many scholars and devotees to present the book in its original form, and Messrs. Macmillan and Co. agreed to publish the complete edition. Thus the present attempt is to offer the original manuscript of this great book of knowledge with full paramparā explanation in order to establish the Kṛṣṇa consciousness movement more soundly and progressively. (Bhagavad-gītā As It Is - Preface) » more here «