The books Srila Prabhupada brought with him from India were the first three
volumes of the Srimad Bhagavatam he had printed in Delhi between 1960 and 1965.

Before coming to the United States in 1965 Srila Prabhupada had translated and printed the first canto of Srimad-Bhagavatam in three 400 page hard-cover volumes. Prabhupada did not come to America empty handed. He came with his books. During the first year he spent in the United States, Srila Prabhupada supported himself by selling his Srimad-Bhagavatam sets through book stores in New York City and also directly to the people he met and was preaching to. 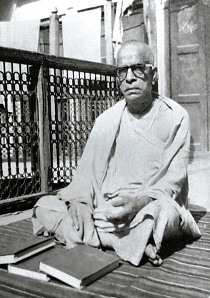 This image shows Srila Prabhupada in Delhi with his Bhagavatams before departing for the US. After obtaining his passport and visa, Srila Prabhupada boarded the Jaladuta steamship in Calcutta, on August 13th, 1965. Several trunks containing 200 sets of his 3-volume Srimad-Bhagwatams were loaded aboard en route.

In this entry from Srila Prabhupada's Jaladuta Dairy, August 22, 1965, he wrote: - "At about 10 a.m. we are now in the dockyard of Cochin. The dock is peculiar because it is by nature full of small islands. Some of the islands are full with nice hutments formerly known as British Island. I saw my books from Bombay arrived in five cases and the agents loaded them on the ship at 4 p.m. on 22/8/65."

Srila Prabhupada came to the United States in 1965 on the Jaladuta, an Indian cargo ship. He convinced the owner of the shipping company, Srimati Morarji, to give him free passage. According to Sally Agarawal, the wife of Gopal Agarawal, who sponsored Srila Prabhupada’s trip and made the arrangements for the first three weeks he was in the United States: “The Swami came with so few possessions. He came with the clothes he had on his back, He had a typewriter and he had his books. And he had a bag of cereal. Imagine coming to a country on the other side of the world with so little. And yet he came with so much in himself. The Swami brought a pan with him in which he cooked his food and in fact cooked our lunch too. Our little boy was only six months old when he came and the Swami was there when Bridge first stood. And he laughed and laughed to see him stand up. When he left he was just oceanic, oceanic. He just seemed to take in the entire universe when he left and he left a lot. I enjoyed my association for that one month with him about as much as I have enjoyed anything in my life.”

In Srila Prabhupada's letter to Hanuman Prasad Poddar, written 2-05-70 in Los Angeles, he tells some of the history of his Srimad Bhagwatams:

".... In 1936, my Spiritual Master left this world leaving a message for me that it would be better for me to preach in English language. So I was thinking very seriously, and then, as late as 1944 I started my paper, "Back to Godhead." Gradually, in 1954, I retired from my family life and began to live alone in Mathura Vrindaban. In 1959, I was awarded Sannyas by one of my Godbrothers, His Holiness B.P. Kesava Maharaja.

Then I began translating Srimad-Bhagavatam in 1960; and, perhaps in 1961, I was your guest in the Gita Bagicha. You were very kind to help me partially for publishing my first volume of Srimad-Bhagavatam through the Dalmia Charitable Trust. With great difficulty, I then published the second and third volumes of Srimad-Bhagavatam until 1965, when I prepared myself to come to this country with some books. 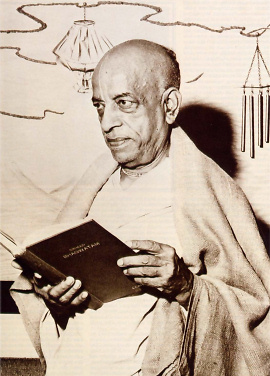 With great difficulty, I was able to get the "P" Form passed by the Controller of Foreign Exchange, and, someway or other, I reached Boston on 17th September, 1965. I was thinking, while on board the ship "Jaladuta," why Krishna had brought me to this country. I knew that Western people are too much addicted to so many forbidden things according to our Vedic conception of life. So out of sentiment I wrote a long poetry addressing Lord Krishna as to what was His purpose in bringing me to this country.

At that time, I was sponsored by a friend's son, Gopala Agarwal, who is settled up in this country by marrying an American girl, Sally. I was their guest, and I feel very much obliged to Gopala and his wife Sally for their nice treatment and reception. I was with them for three weeks in Butler, near Pittsburgh, Pennsylvania, and then I came to New York. I was getting some money by selling my Srimad-Bhagavatam, thus I was maintaining myself in New York. After some time, I rented one apartment at number 100 71st Street West, but after a few months, all my things--typewriter, tape recorder, books--were stolen. Then for some time one of my students gave me shelter at Bowery Street.

I then rented one store-front and an apartment at 26 Second Avenue for $200 per month, but without any source of income. I started my classes and sometimes, on Sundays, I used to chant Hare Krishna Mantra in Tomkins Square Park from three to 5 P.M. During this time, all the young boys and girls used to gather around me, sometimes poet Ginsberg would come to see me, and sometimes a reporter from the New York Times came to see me. In this way, the Hare Krishna Mantra chanting became very popular on the Lower East Side."

These Srimad Bhagwatams are among the most valuable memorabilia one can have of Srila Prabhupada. The timing of their publication coincides directly with Srila Prabhupada's departure for the Western world. He left India a very short time after the last volume was printed, and it seems obvious that the completion of this task signalled the time for his departure. 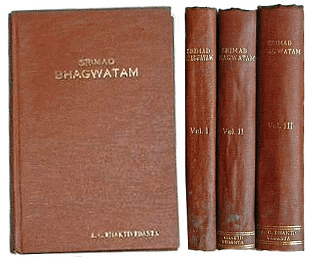 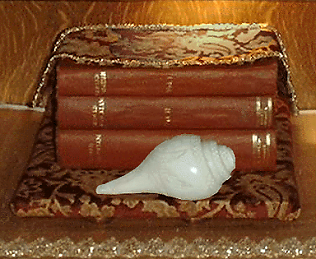 When one reads these original Bhagwatams, perhaps more than any of Srila Prabhupada's other writings, you can feel the Vrindaban mood. Srila Prabhupada was there alone writing his purports, whereas the other Bhagavatams were translated and written while he was surrounded by many followers and his ISKCON movement was rapidly growing. This was quite a contrast to the circumstances surrounding his first books.

Although these books were not edited as the later ones were (re-prints), and thus contain some typos and English imperfections, there is absolutely no less spiritual potency. In fact, whether its sentiment or realization, to my mind these early editions are preferable, and represent one of the strongest arguments for not making any changes or 'improvements' to the Sampradaya Acarya's books after his departure.

We feel that every newcomer to Krsna Consciousness should have the opportunity to read these original Bhagwatams so they can get to know Srila Prabhupada in a more intimate way. 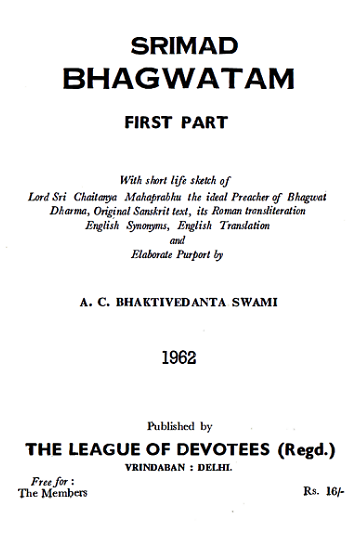 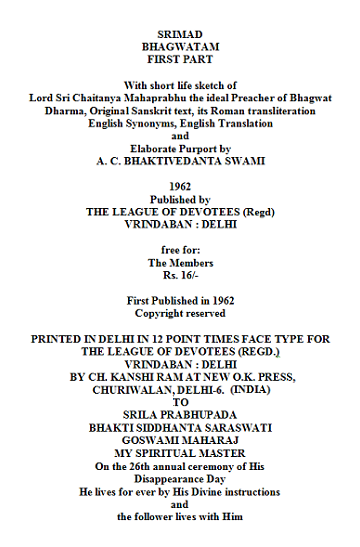